Hans Götzsche was chair of the organising committee of the

The Meaning of Language: The Semantics, Logic and Psychological Reality of Words and Sentences

The project is a current project on a linguistics approach to dyslexia.

A Formative Grammar on English

In preparation.
(With Charles Prescott, University of Sussex, and Dr. Farshad Badie)

The project is a life-long basic research project elaborating the special linguistic theory invented and developed by Hans Götzsche, Formative Grammar, and its specific applications to different kinds of linguistic phenomena: 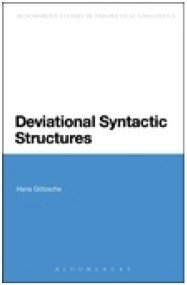 The book offers the first (and only) formal unification of Louis Hjelmslev’s Glossematics and Paul Diderichsen’s so-called ‘sentence scheme’ (in the book called sentence table), which is an empirical generalisation of the syntax of Danish, also applied to Swedish and Norwegian.

(ii) semantics (Epi-Formal Analysis in Semantics (EFA(SE), in process), and

The projects are related to the projects ‘Occurrence Logic’ and ‘Mathematics and Language’. Initial progress has been made on alternative formalisms concerning analysing the semantics of texts.

Initial progress has been made on alternative formalisms concerning analysing the semantics of texts and a collaboration with a software company on an application to text corpora has been initiated.
(With Dr. Michael Richter and Dr. Farshad Badie)

A life-long basic research project elaborating the notion of Occurrence Logic invented by Hans Götzsche. It is the basis of the formalisms implemented in Formative Grammar. The project is linked to the project ‘Language and Mathematics’.
(With Dr. Michael Richter and Dr. Farshad Badie)

The project is a long-term basic research project investigating the relation between natural languages and the formal language of mathematics. This is carried out primarily through a detailed study of the history, syntax and semantics of numerals.
(With Dr. Michael Richter and Dr. Farshad Badie)

In progress.
The project is a long-term project investigating syntactic and word formation phenomena in Danish and Swedish texts from the Old Danish/Old Swedish (ca. 800-1100) period through the 18th Century. The project is related to the ‘Steno Project’. A number of other languages will also be investigated.

In progress.
The project is a long-term project investigating some of the Latin manuscripts by Niels Steensen (Steno) concerning stylistic phenomena and comparing them with the style of 17th Century texts in Danish and Swedish. The project is related to the ‘Historical Syntax’ Project.

In progress.
The project is a long-term project investigating some of the later publications of Francesco Petrarca.